This workflow describes the general approach if you want to import a SFM project into Pragma and render it. There are a few things to take into consideration:

Now that that's out of the way, there are two things have to take care of before you can import your SFM session into PFM:

PFM does not support SFM IK rigs. If your animation uses any IK rigs, you have to follow these steps in SFM first:

1.) Make sure all transforms for all actors are unlocked:

2.) Detach all rigs from all actors that have one: 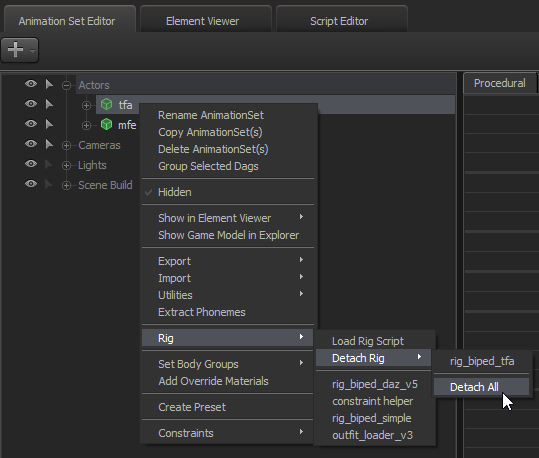 If your SFM projects are located in one of the default SFM locations (e.g. common/SourceFilmmaker/game/usermod/elements/sessions), then PFM should be able to find them by default. However, if they are under a custom location (e.g. SourceFilmmaker/game/ninja12r), you will have to do the following to allow Pragma/PFM to find them:

Make sure to add the ',' for the previous entry as well, as shown in the screenshot above.

Once you've completed the previous steps, you're ready to start Pragma. Double click pragma.exe and click New Game. Here you will have to select the map that was used for the SFM session, as well as Filmmaker for the Game Mode. Now click Start Game. If this is your first time loading the map, the map and its assets will have to be converted to Pragma's formats first, which may take several minutes or more, depending on the map's size and complexity.

Once the map has been loaded, you should be greeted by the PFM interface. You can now import the SFM project from the menu bar via File > Import > SFM Project. Once again, this may require a lot of asset conversions and may take a while. While it is loading PFM will appear frozen. Eventually you should be able to see your scene pop up in the viewport.

The next step depends on what you're trying to accomplish. If you want to get straight into rendering, you can check out some of the rendering workflow tutorials:

Regardless of your goal, it is also recommended that you familiarize yourself with the user interface, as well as read up on some of the rendering tutorials. Please don't hesitate to ask questions on the Discord server if you're having trouble!

You can find an overview of all available chapters about PFM here.